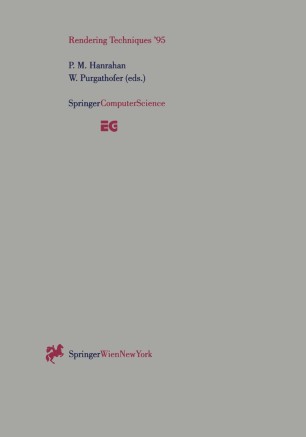 Proceedings of the Eurographics Workshop in Dublin, Ireland, June 12–14, 1995

Following five successful workshops in the previous five years, the Rendering Workshop is now well established as a major international forum and one of the most reputable events in the field of realistic image synthesis. Including the best 31 papers which were carefully evaluated out of 68 submissions the book gives an overview on hierarchical radiosity, Monte Carlo radiosity, wavelet radiosity, nondiffuse radiosity, and radiosity performance improvements. Some papers deal with ray tracing, reconstruction techniques, volume rendering, illumination, user interface aspects, and importance sampling. Also included are two invited papers by James Arvo and Alain Fournier. As is the style of the Rendering Workshop, the contributions are mainly of algorithmic nature, often demonstrated by prototype implementations. From these implementations result numerous color images which are included as appendix. The Rendering Workshop proceedings are certainly an obligatory piece of literature for all scientists working in the rendering field, but they are also very valuable for the practitioner involved in the implementation of state of the art rendering system certainly influencing the scientific progress in this field.