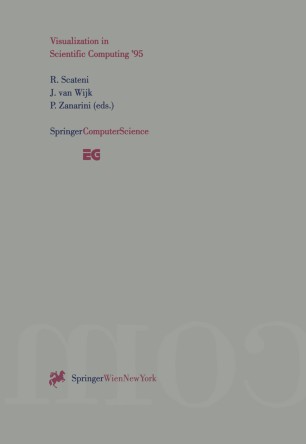 Proceedings of the Eurographics Workshop in Chia, Italy, May 3–5, 1995

Visualization is nowadays indispensable to get insight into the huge amounts of data pro­ duced by large scale simulations or advanced measurement devices. The use of com­ puter graphics for scientific purposes has become a well established discipline, known as Scientific Visualization. Many problems still have to be solved, and hence the field is a very active area for research and development. This book represents results of the sixth in a well established series of international workshops on Visualization in Scien­ tific Computing organized by the EUROGRAPHICS Association in collaboration with CRS4 (Center for Advanced Studies, Research and Development in Sardinia), held from May 3 to May 5,1995, in Chia, Italy. The thirteen contributions selected for this volume cover a wide range of topics, ranging from detailed algorithmic studies to searches for new metaphors. A rough di­ vision can be made into the parts interaction, irregular meshes, volume rendering, and applications. Interaction in three dimensions is a challenging area for research. The use of three­ dimensional user interfaces for more natural manipulation of three-dimensional data and their visualization is natural, but is far from trivial to realize. Pang et al. investigate the use of common objects such as spray cans and carving knives as metaphors for visualiza­ tion tools, in order to provide an intuitive and natural three dimensional user interface. Gibson uses a voxel-based data representation, not only for visualization, but also for physical modeling of objects. A prototype system under development for haptic explo­ ration is discussed.