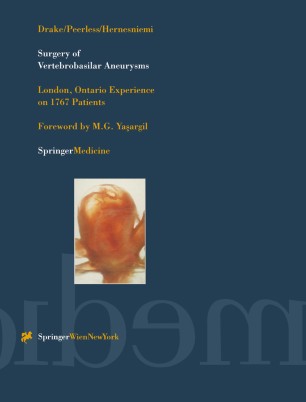 It is a great privilege to write the foreword for this classical work of Professor Charles Drake. There is no doubt that intracranial aneurysms have existed since the beginning of time. This terrifying disease of the brain arteries, with its dramatic consequences for the patient, has surely been observed in all human collectives, although clear definition and description in the literature began only 300 years ago. During the last century, clinical signs and symptoms have been carefully observed and analyzed, and 100 years ago, the first attempts were made for surgical treatment, such as the ligature of external and internal carotid and vertebral arteries. With the introduction of angiography, an entirely new dimension of diagnosis and differential diagnosis of the vascular diseases of CNS, was accomplished. In the years between 1945 and 1970, the neurosurgeon was increasingly stimulated to directly eliminate intracranial aneurysms. The most respected and avoided location, the aneurysms at the bifurcation of the basilar artery, remained as a "dark corner. " Several pioneers of neurosurgery attempted to explore the interpeduncular fossa, but finally retreated. Not so Charles Drake. His vision must have been stronger than his anxiety, after experiences of initial fatalities, to persevere more decisively in this desperate fight instead of to yield. Such steadfastness requires enormous courage. But what distin­ guishes courage! Surgical courage is not just a fearless or unscrupulous action.