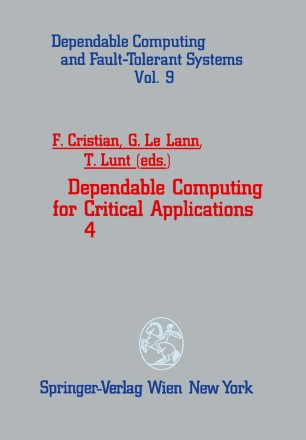 This volume contains the articles presented at the Fourth InternationallFIP Working Conference on Dependable Computing for Critical Applications held in San Diego, California, on January 4-6, 1994. In keeping with the previous three conferences held in August 1989 at Santa Barbara (USA), in February 1991 at Tucson (USA), and in September 1992 at Mondello (Italy), the conference was concerned with an important basic question: can we rely on computer systems for critical applications? This conference, like its predecessors, addressed various aspects of dependability, a broad term defined as the degree of trust that may justifiably be placed in a system's reliability, availability, safety, security and performance. Because of its broad scope, a main goal was to contribute to a unified understanding and integration of these concepts. The Program Committee selected 21 papers for presentation from a total of 95 submissions at a September meeting in Menlo Park, California. The resulting program represents a broad spectrum of interests, with papers from universities, corporations and government agencies in eight countries. The selection process was greatly facilitated by the diligent work of the program committee members, for which we are most grateful. As a Working Conference, the program was designed to promote the exchange of ideas by extensive discussions. All paper sessions ended with a 30 minute discussion period on the topics covered by the session. In addition, three panel sessions have been organizcd.