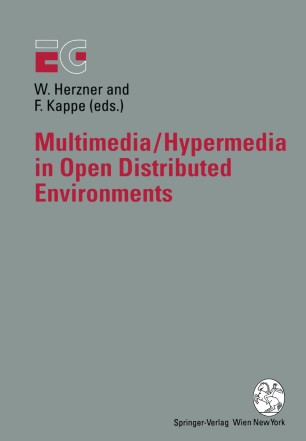 Proceedings of the Eurographics Symposium in Graz, Austria, June 6–9, 1994

Over the last few years, multimedia hardware and applications have become widely available in the personal computer and workstation environments, and multimedia is rapidly becoming an integral part of stand-alone, single-user sy­ stems. In contrast, the problems encountered when moving to open, distributed environments are only just beginning to be identified. Examples are the trans­ mission of dynamic data (video, sound) over large distances and cooperative work. Following on from two successful workshops on multimedia, EG-MM '94 concentrates on topics related to multimedia/hypermedia in open, distributed environments. The goal of this symposium was not only to give a comprehensive overview of the current state of research, development, and standardisation in the field, but also to provide an opportunity for live demonstrations to experience directly the presented results. The symposium program consists of two invited keynote speeches, eight tech­ .nical sessions, one tutorial, and one demonstration session. A workshop following immediately after the symposium provides an opportunity for in-depth discussi­ ons of open problems among experts. It is intended to fill a gap often experienced at larger meetings and conferences: the lack of time to discuss in detail issues raised during the event, such as the characteristics of different approaches to a certain problem. It is intended that the results of the workshop be published as a Eurographics Technical Report.