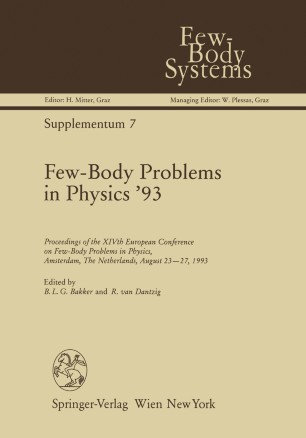 Proceedings of the XIVth European Conference on Few-Body Problems in Physics, Amsterdam, The Netherlands, August 23–27, 1993

It is apparent from the history of science, that few-body problems have an interdis­ ciplinary character. Newton, after solving the two-body problem so brilliantly, tried his hand at the Sun-Earth-Moon system. Here he failed in two respects: neither was he able to compute the motion of the moon accurately, nor did he understand the reason for that. It took a long time to understand the fundamental importance of Newton's failure, and only Poincare realised what was the fundamental difficulty in Newtons programme. Nowadays, the term deterministic chaos is associated with this problem. The deep insights of Poincare were neglected by the founding fathers of Quantum Physics. Thus history was repeated by Bohr and his students. After quantising the hydrogen atom, they soon found that the textbook case of a three-body problem in atomic physics, the 3He-atom, did not yield to the Bohr-Sommerfeld quantisation methods. Only these days do people realise what precisely were the difficulties connected to this semi­ classical way of treating quantum systems. Our field, as we know it today, began in principle in the early 1950's, when Watson sketched the outlines of three-body scattering theory. Mathematical rigour was achieved by Faddeev and thereafter, at the beginning of the 1960's, the quantum three-body prob­ lem, at least as far as short-range forces were concerned, w&s tamed. In the years that followed, through the work of others, who first applied Faddeev's methods, but later added new techniques, the three-and four-body problems became fully housebroken.