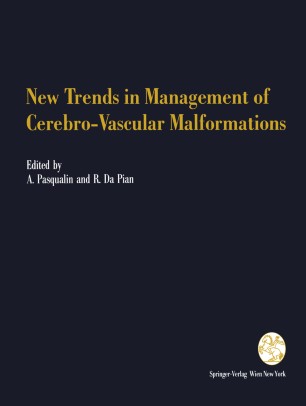 Every so often a gathering of minds and experience occurs that results in an all encompassing overview in depth of such a vast subject as Cerebro-Vascular Malformations, as occurred in Verona in June 1992 and which warrants publication. Professors Da Pian and Pasqualin deserve high compliment and it is a measure of the respect in which they are held that virtually all those most knowledgeable around the world attended, presented their work and thoughts and contributed to intense discussion. Ljunggren's opening historical survey set the stage and must be the most comprehensive yet published. Subarachnoid hemorrhage from aneurysm rupture still constitutes, I dare say, the most difficult problem for neurosurgeons, in relief of the brain injury and arterial reaction and the technical perfection of aneurysm obliteration, even for small, as well as large and giant sacs. Very large high flow A VMs can be as demanding too. The bulk of the conference was devoted to subarachnoid hemorrhage, aneurysms and A VMs which were discussed under about 14 headings each. But vein of Galen malformations, dural A VMs, cavernous angiomas and venous angiomas (renamed developmental venous anomalies) came under scrutiny, not always with consensus. Trends are perceptible such as fibrinolysis of subarachnoid clot, non surgery for Galenic and dural malforma­ tions, the benignity of venous angioma, but there is still much variation in approach, pharmacologically, technically and with such as the evolving endovascular and radiosurgical stories, used alone or in conjunction.