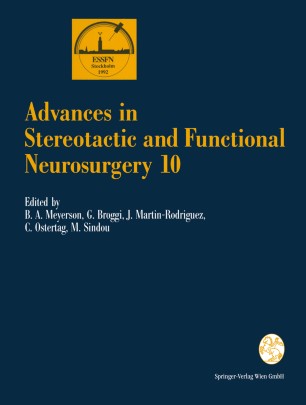 Advances in Stereotactic and Functional Neurosurgery 10

These proceedings from the Xth Congress of the European Society for Stereotactic and Functional Neurosurgery in Stockholm reflect the growing interest in these fields of neurosurgery. It is the most extensive volume in this series of publications and it contains a large number of original articles pertaining to the most recent advances in stereotactic and functional neurosurgery. Not long ago stereotactic neurosurgery was considered an esoteric sub speciality practised only by those involved in treating movement disorders and pain. In the last decade we have witnessed the incorporation of stereotactic methodology in the management of common neurosurgical diseases, and the stereotactic technique is now practised in all major neurosurgical centers. As with other surgical techniques and tools, however, the utilization of stereotactic methods requires special knowledge and training. This book comprises articles which give insight into new stereotactic applications and technology. For example, the usage of stereotaxis without a frame and the so-called navigator systems in open tumor surgery is dealt with in two papers. The introduction and development of radiosurgery is closely linked to the advancement of stereotactic technique. Radiosurgical treatment of tumors and cerebrovascular diseases has been one of major achievements in modern neurosurgery. This publication contains several original reports illustrating the efficacy of radiosurgery in problematic neurosurgical diseases.