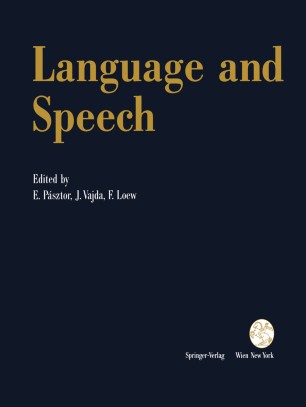 Proceedings of the Fifth Convention of the Academia Eurasian Neurochirurgica, Budapest, September 19–22, 1990

Language and Speech has been selected for the Fifth Convention of the Academia Eurasiana Neurochirurgica as a topic closely related to neurosurgery but also to philosophy, art, culture and humanity and treated by various experts of the field of this interdisciplinary subject. The volume has a certain structure: Language is evaluated as a tool of the Homo Artis in the introduction, which is followed by chapters focusing the language in history, in linguistics, as well as in music and that of the animals. In the next part speech is dealt with as a physiological process. It is followed by papers on three different but uniformly neurosurgical representation of speech in gliomas, AVMs, and focal epilepsies. Neurologists compiled papers on clinical forms of aphasia, and that among bilinguists as well as on lateralisation of speech centres in relation of handedness followed by rehabilitation of speech disorders. Two papers on language and computers complete the volume.