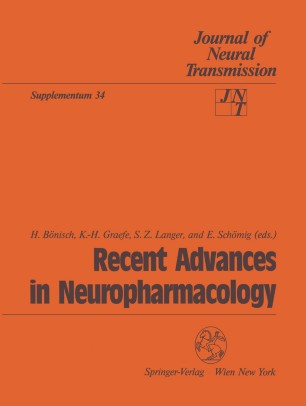 This volume is dedicated to Professor Ullrich Trendelenburg. It contains the proceedings of a symposium which was held in his honour on the occasion of his retirement and took place March 22-24, 1991 in Wiirzburg. Ullrich Trendelenburg was the head of the Department of Pharmacology at Wiirzburg University from 1968 till the end of March 1991. He is famous internationally for his contributions to the physiology and pharmacology of the autonomic nervous system, and his impact on pharmacology in general throughout the world has been outstanding. The various phases of his life and his career have been delineated recently by Youdim and Riederer (Journal of Neural Transmission; Suppl. 32, 1990). The articles included in this volume reflect a considerable range of current research work dealing with various aspects of neuropharmacology, i. e. , the field of research Ullrich Trendelenburg has influenced most. One or more authors of each chapter are either former or present students and coworkers or close friends of Ullrich Trendelenburg. The first section is devoted to the synthesis and metabolism of catecholamines as well as to the mechanisms by which amine transmitters are removed from the extracellular fluid; three chapters deal with the two types of extraneuronal uptake of catecholamines. The second section concentrates on the release of catecholamines in the peripheral and the central nervous system, the regulation of transmitter release and the noradrenaline-ATP co-transmis­ sion. The third section deals with the pharmacology of various receptors, including agrenoceptors, adenosine, 5-HT and glutamate receptors.