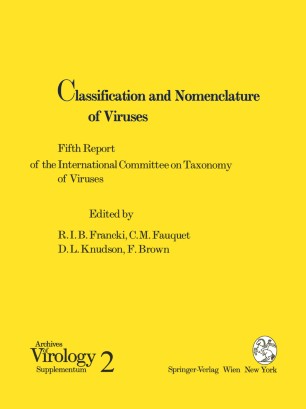 Classification and Nomenclature of Viruses

The Fifth Report of the International Committee on Taxonomy of Viruses (ICTV), summarizes the proceedings and decisions reached by the ICTV at its meetings held at the International Congresses of Virology in Sendai (1984), Edmonton (1987) and Berlin (1990). This report has been organized in the same way as the previous ones (Wildy, 1971; Fenner, 1976; Matthews, 1979; 1982), yet it encompasses many more families and groups of viruses than previous reports, and it includes new tables, diagrams and keys. The officers and members of the ICTV study groups from 1984 to 1990 are listed, as the current ICTV statutes and rules of nomenclature. Information on the format for submission of new taxonomic proposals to the ICTV is also provided. Since the Fourth Report of the ICTV (1982), 19 new virus families and groups have been described. This report includes 2,430 viruses belonging to 73 families or groups, as well as virus satellites and viroids descriptions, but it does not include descriptions not approved by the ICTV. It now will be possible to publish such preliminary, and in some cases controversial, descriptions in the Virology Division pages of the Archives of Virology --this will allow virologists to carry on the kind of interim dialogue that is necessary for arriving at broad agreement on taxonomic matters.