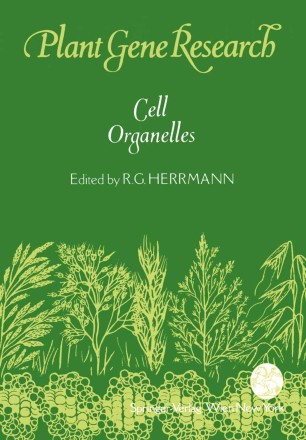 The compartmentation of genetic information is a fundamental feature of the eukaryotic cell. The metabolic capacity of a eukaryotic (plant) cell and the steps leading to it are overwhelmingly an endeavour of a joint genetic cooperation between nucleus/cytosol, plastids, and mitochondria. Alter­ ation of the genetic material in anyone of these compartments or exchange of organelles between species can seriously affect harmoniously balanced growth of an organism. Although the biological significance of this genetic design has been vividly evident since the discovery of non-Mendelian inheritance by Baur and Correns at the beginning of this century, and became indisputable in principle after Renner's work on interspecific nuclear/plastid hybrids (summarized in his classical article in 1934), studies on the genetics of organelles have long suffered from the lack of respectabil­ ity. Non-Mendelian inheritance was considered a research sideline~ifnot a freak~by most geneticists, which becomes evident when one consults common textbooks. For instance, these have usually impeccable accounts of photosynthetic and respiratory energy conversion in chloroplasts and mitochondria, of metabolism and global circulation of the biological key elements C, N, and S, as well as of the organization, maintenance, and function of nuclear genetic information. In contrast, the heredity and molecular biology of organelles are generally treated as an adjunct, and neither goes as far as to describe the impact of the integrated genetic system.