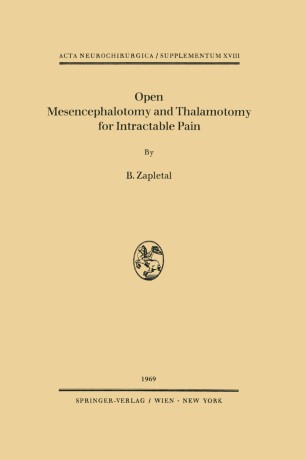 Severe, protracted pain defying control is being seen with in­ creasing frequency as a symptom of chronic disease. It accompanies many, mostly serious, disorders in various organs and parts of the human body, making the sufferer's life increasingly intolerable. It no longer fulfillR its mission of warning signal of disease present, protecting health, but on the contrary arises as an important factor in systematically reducing and preparing the final collapse of the defensive forces of the body, both in the somatic and psychic spheres. It can surprise nobody that patients tormented and plagued by severe pain do not wish to live under conditions primarily caused by incurable disease, and are looking forward longingly to their release by deat. h, if no help is forthcoming. Attempts to control such pain are, therefore entirely justified, necessary and logical. The treatment of intractable pain is without exception sympto­ matic in character. Efforts to control it by drugs are, even at present and despite the striking progress in pharmacology, unsatisfactory and inadequate. So far we know of no drug capable of effectively and systematically alleviating such pain without concurrently inter­ fering with the other sensitive-sensory components. In addition to the direct changes and dist. urbances of consciousness and personal­ ity, protracted conservative therapy results in addiction to narcot­ ics.