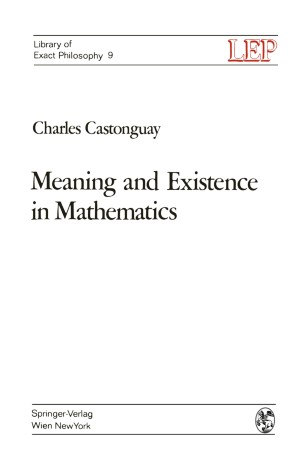 Meaning and Existence in Mathematics

The take-over of the philosophy of mathematics by mathematical logic is not complete. The central problems examined in this book lie in the fringe area between the two, and by their very nature will no doubt continue to fall partly within the philosophical re­ mainder. In seeking to treat these problems with a properly sober mixture of rhyme and reason, I have tried to keep philosophical jargon to a minimum and to avoid excessive mathematical compli­ cation. The reader with a philosophical background should be familiar with the formal syntactico-semantical explications of proof and truth, especially if he wishes to linger on Chapter 1, after which it is easier philosophical sailing; while the mathematician need only know that to "explicate" a concept consists in clarifying a heretofore vague notion by proposing a clearer (sometimes formal) definition or formulation for it. More seriously, the interested mathematician will find occasional recourse to EDWARD'S Encyclopedia of Philos­ ophy (cf. bibliography) highly rewarding. Sections 2. 5 and 2. 7 are of interest mainly to philosophers. The bibliography only contains works referred to in the text. References are made by giving the author's surname followed by the year of publication, the latter enclosed in parentheses. When the author referred to is obvious from the context, the surname is dropped, and even the year of publication or "ibid. " may be dropped when the same publication is referred to exclusively over the course of several paragraphs.