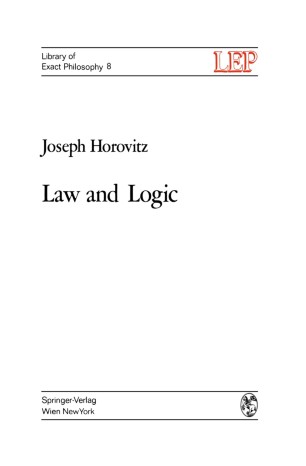 This book has two related aims: to investigate the frequently voiced claim that legal argument is nonformal in nature and, within the limits of such an investigation, to ascertain the most general proper­ ties of law as a rational system. Examination of a number of views of legal argument, selected from recent discussions in Germany, Belgium, and the English-speaking countries, will lead to the follow­ ing main conclusions. The nonformalistic conceptions of the logic of legal argument are ambiguous and unclear. Moreover, insofar as these conceptions are capable of clarification in the light of recent analytical methodology, they can be seen to be either mistaken or else compatible with the formalistic position. Because law is socially directive and coordinative, it is dependent upon theoretical psycho­ sociology and calls, in principle, for a deontic and inductive logic. The primary function of legal argument is to provide continuing reinterpretation and confirmation of legal rules, conceived as theo­ retical prescriptions. On the basis of this conception, the old juris­ prudential conflict between formalism and rule-scepticism appears substantially resolved. Aristotle, the founder of the theory of argument, conceived it as "the science of establishing conclusions" (bnO'l;~fl'YJ &no~e!"u,,~), designed to guide people in rational argumentation. In time, how­ ever, logic forsook its practical function and developed as a highly abstract and disinterested study, today called "formal logic"; and the theory of practical argument was either neglected or relegated to an appendix to rhetoric.