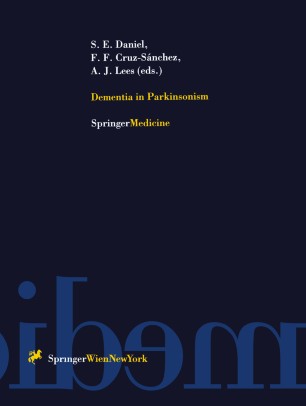 In his original essay on the shaking palsy (1817) James Parkinson remarked that the "senses and intellect were uninjured". Thus, it was only in later years that the complexity ofparkinsonism and in particular Parkinson's disease with dementia was recognised. Cognitive impairment in Parkinson's disease is common and is estimated to affect more than forty per cent of patients with disease onset after age 65. Recent studies suggest that pathology of Parkin­ son's disease now ranks second to Alzheimer's disease as the commonest sub­ strate of dementia in elderly patients. The condition is heterogeneous and there remain many complicated and unresolved questions concerning cause, diagnosis and classification. In an attempt to clarify these issues, scientists and members of the European Brain Bank Network (EBBN) gathered in London for a meeting entitled "Dementia in Parkinsonism". The resultant monograph is testimony to the wide-ranging clinical, morphological and biochemical aspects of this condition. We are grateful to all contributors for expressing their expert opinions and for being so generous with their time taken in prepa­ ration of the manuscripts. The meeting was funded by the Commission of the European Communities as part of a Biomed-l Programme. We wish to thank Amgen Limited, Lilly Industries Limited and Roche Products Limited for additional sponsorship. The expert secretarial assistance of R. Nani in the pre­ paration of this book has been very much appreciated. London, November 1997 S. E. Daniel F. F. Cruz-Sanchez A. J. Lees Contents Stern, G. : The language of the basal ganglia . . . . . . . . . . . . . . . . . . . . . .