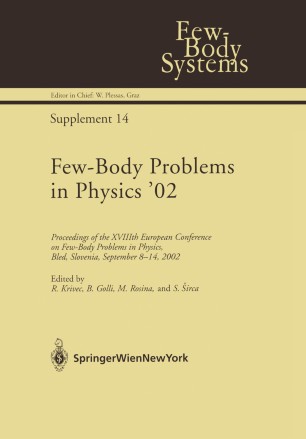 In this Supplement we have collected the invited and contributed talks pre­ sented at the XVIII European Conference on Few-Body Problems in Physics, organised by the Jozef Stefan Institute and the University of Ljubljana, Slove­ nia. The Conference, sponsored by the European Physical Society, took place at the lakeside resort of Bled from 8 to 14 September, 2002. This meeting was a part of the series of European Few-Body Conferences, previously held in Evora/Portugal (2000), Autrans/France (1998), Peniscola/Spain (1995), ... Our aim was to emphasise, to a larger extent than at previous Conferences, the interdisciplinarity of research fields of the Few-Body community. To pro­ mote a richer exchange of ideas, we therefore strived to avoid parallel sessions as much as possible. On the other hand, to promote the participation of young scientists who we feel will eventually shape the future of Few-Body Physics, we wished to give almost all attendees the opportunity to speak.