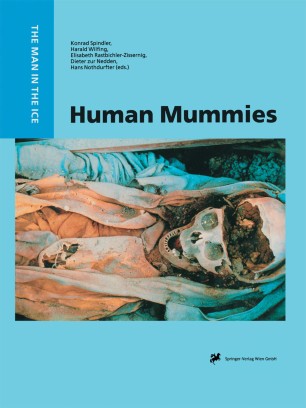 A Global Survey of their Status and the Techniques of Conservation

On 15-17 September, 1993, Innsbruck, Austria, search. Another remarkable case, that of the pre-Colum­ hosted the International Mummy Symposium. This bian miner from Restauradora Mine near Chuqincamata does not mean that beautiful North Tyrol was the setting in northern Chile, is the result of impregnation with for a gathering of the world's most prominent mummies copper salts, and the mummy became an attraction as themselves, but rather the exciting discovery of a Late "Copper Man" at various fairs around the country. As he Neolithic glacial mummy released from the ice of the was found with a complete set of miner's tools, the Otztal Alps provided the focus of attention for numerous mummy offers a unique insight into the life and working scholars from many different parts of the world to come conditions of an Indio miner of the first millennium AD. together to address various questions relating to mum­ Even so, the mummified remains comprise only the skel­ mified human remains. eton with a completely rigid covering of skin, whereas Normally researchers studying the remains of histori­ the other soft parts have not survived. calor prehistoric human bodies will at best have bony In contrast, mummification in ice, and especially in substance to work on. It is rarely the case that soft parts the permafrost, can produce much better results.