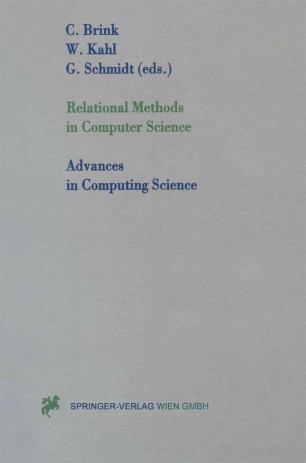 Part of the Advances in Computing Sciences book series (ACS)

The calculus of relations has been an important component of the development of logic and algebra since the middle of the nineteenth century, when Augustus De Morgan observed that since a horse is an animal we should be able to infer that the head of a horse is the head of an animal. For this, Aristotelian syllogistic does not suffice: We require relational reasoning. George Boole, in his Mathematical Analysis of Logic of 1847, initiated the treatment of logic as part of mathematics, specifically as part of algebra. Quite the opposite conviction was put forward early this century by Bertrand Russell and Alfred North Whitehead in their Principia Mathematica (1910 - 1913): that mathematics was essentially grounded in logic. Logic thus developed in two streams. On the one hand algebraic logic, in which the calculus of relations played a particularly prominent part, was taken up from Boole by Charles Sanders Peirce, who wished to do for the "calculus of relatives" what Boole had done for the calculus of sets. Peirce's work was in turn taken up by Schroder in his Algebra und Logik der Relative of 1895 (the third part of a massive work on the algebra of logic). Schroder's work, however, lay dormant for more than 40 years, until revived by Alfred Tarski in his seminal paper "On the calculus of binary relations" of 1941 (actually his presidential address to the Association for Symbolic Logic).