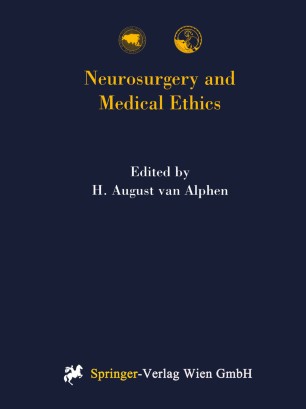 This supplement of Acta Neurochirurgica contains the proceedings of the Ninth Convention of the Academia Eurasiana Neurochirurgica held in Chateau St. Gerlach, Houthem, The Netherlands, 29 July - 1 August 1998. During this convention a three-day symposium on Neurosurgery and Medical Ethics was held. In this time of tremendous technical advancement in medicine in general and neurosurgery in particular, we are liable to lose sight of the sick patient as a human being, and the odds are that he will be the object rather than the subject of our action in the near future. It is a purpose and a task of the Academia Eurasiana Neurochirurgica to recognize this thread and to pay attention to tradition, morality and ethics in neurological surgery. The theme of this convention and the subject of the symposium met this purpose as no other. In the scientific sessions during the first day, the moral backgrounds of medical ethics in the most important cultures and religions in east and west were elucidated by invited experts in this field. A mutual respectful understanding of each other's conception of and belief in ethical principles is a growing necessity in our multicultural societies in both continents. On the second day, the ethical aspects of different fields of neurological surgery were discussed by members of the Academia. In this context, also the internationally much-discussed and much-criticized regulations on euthanasia in The Netherlands were explained.