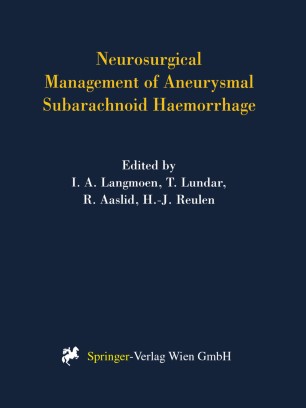 The small neck of the aneurysm afforded an easy surgical attack. An ordinary flat silver clip was placed over the sac and tightly compressed obliterated it completely. The clip was flush with the wall of the carotid artery. The sac, lateral to the silver clip, was then picked up with the forceps and thrombosed by the electocautery. Walter Dandy reporting his successful operation of a posterior communicating aneurysm on March 23, 1937. Walter Dandy's patient left the hospital in good health 2 weeks later, and from his report one may gain the impression that the operation was an easy task. Despite continuous developments during the following decades, it was not until the introduction of the operating microscope and microsurgical techniques that surgical treatment was generally accepted. During the microsurgical era surgical results have continued to improve due to diagnostical, neuroanaesthesi­ ological, and microsurgical refinements, and improved neurointensive care. Endovascular obliteration has become an important treatment alternative but this has not been included in this particular volume. The purpose of the present supplement of the ACTA NEUROCHIRURGICA is to review some of the elements in the neurosurgical management of patients with aneurysmal subarachnoid haemorrhage that are important for a successful outcome. Professor Helge Nornes has been a major force in the development of new techniques and research strategies in this area for a number of years and has recently retired from the National Hospital in Oslo.