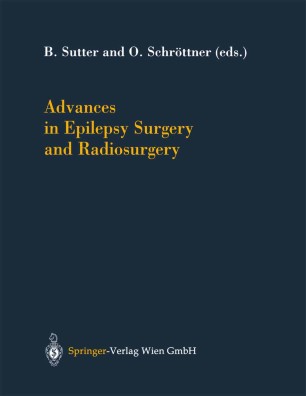 Advances in Epilepsy Surgery and Radiosurgery

Washington D. C. , and at the Columbia University New York. In 1967 and 1968 he worked as a gen­ eral surgeon at the 1st Surgical Department of the Vienna Medical School with Professor Fuchsig. At the Max-Planck Institute in Munich he worked in the years 1968 to 1969 as a neuropathologist. In the year 1969 till 1972 back at the Department of Neurosurgery in Vienna he served as a general neurosurgeon and one of his main goals was pediatric neurosurgery. In Au­ gust 1972 he moved to Kiel to work with Professor Jensen at the Neurosurgical University Hospital. He had to graduate one more time in Germany and he did this with "Ultrasound Tomography in Neurosurgery". Together with the Department of Pediatrics he started to build the Pediatric Neurosurgical Department. At this time he started his research on pineal, midbrain and brainstem surgery. In September 1976 he started at the Ostsee Clinic Damp in Schleswig-Holstein to build a Neurosurgical Department that opened its gates on 1977 and he became the first chairman. On On September 30th, 2002 Professor Gerhard Pendl, April 1, 1978 he went back to Vienna as the Vice M. D. retires from his chairmanship at the Department Chairman of the Department of Neurosurgery at the of Neurosurgery at the University Hospital in Graz. University Hospital in Vienna under Professor Koos Shortly after his birth on July 10, 1934 in Linz and in 1980 he got his Ph. D.