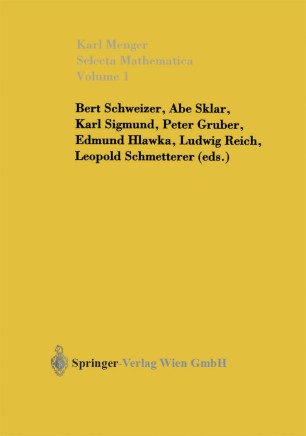 Karl Menger, one of the founders of dimension theory, is among the most original mathematicians and thinkers of the twentieth century. He was a member of the Vienna Circle and the founder of its mathematical equivalent, the Viennese Mathematical Colloquium. Both during his early years in Vienna and, after his emigration, in the United States, Karl Menger made significant contributions to a wide variety of mathematical fields, and greatly influenced many of his colleagues. These two volumes contain Menger's major mathematical papers, based on his own selection from his extensive writings. They deal with topics as diverse as topology, geometry, analysis and algebra, and also include material on economics, sociology, logic and philosophy. The Selecta Mathematica is a monument to the diversity and originality of Menger's ideas.