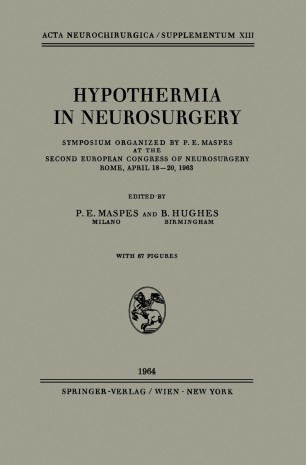 Hypothermia was first applied to the human in 1940 by Smith and Fay in an attempt to affect the growth of malignant tumours, and found its most important application firstly in open cardiac surgery and latterly in neurosurgery. The first results regarding the use of hypothermia in neurosurgery were reported at the First Inter­ national Congress of Neurological Sciences held in Brussels in 1957. The same subject was again considered at the annual meeting of the Societe de Neurochirurgie de Langue Franl}aise held in Montpellier in'1962. When I was charged with the task of organizing the Symposium at the Second European Congress of Neurosurgery, I thought it ad­ visable to put forward again the problem of the use of hypothermia in neurosurgery. Though this procedure had rapidly become popular and a mass of publications from the most important neurosurgical centres of the world had appeared, many problems remained un­ solved, and in particular those related to the choice of cases to be treated, the usefulness of the procedure and its possible dangers.