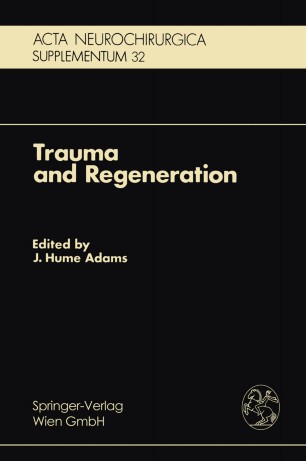 The General Council of the International Society of Neuro­ pathology enthusiastically and unanimously endorsed the sug­ gestion made by the Executive Committee----chaired by Professor Dr. Franz Seitelberger, Vienna-for the IXth International Congress of Neuropathology that one of the major symposia at that Congress should be on Trauma and Regeneration of the Central Nervous System. The reasons for this are not difficult to understand: non-missile head injury and its sequelae-often a permanently brain damaged young adult-is one of the major problems that has faced society for many decades, and is continuing to do so since relatively little progress appears to ha ve been roade in its prevention; and the hope is that experimentalists may be able to shed some light at least on the potential for regeneration in the central nervous system. These proceedings are the outcome of that very successful symposium held in Vienna in September 1982. The Society is most grateful to Allgemeine Unfallversicherungsanstalt (AUVA), Vienna, for their sponsorship. Ofthe faur major presentations, two were on the subject of non­ missile head injury in man and experimental animals, and two dealt with recent developments in the field of regeneration. The former review the clinical features and their structural hasis and establish that all of the major types ofbrain damage seen in man as a result of a non-missile head injury ha ve now been reproduced by controlled angular acceleration of the head in subhuman primates without anything striking the head.