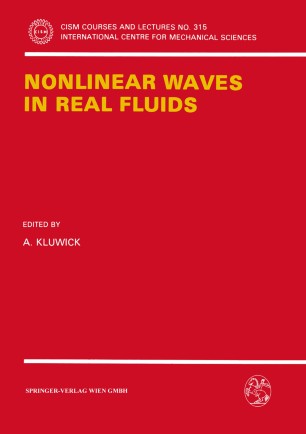 The study of materials which exhibit new and unconventional properties is of central importance for the devel- opment of advanced and refined technologies in many fields of engineering science. In this connection there has been a rapidly growing interest in real fluid effects on wave phenomena in the past few years. A prominent example is provided by Bethe-Zel'dovich-Thompson (BZT) fluids which have the distinguishing feature that they exhibit negative nonlinearity over a finite range of temperature and pressures in the pure vapour phase. However, two phase flows with and without phase change are an even richer source of new unexpected and previously thought impossible phenomena. Topics covered by this volume include waves in gases near the critical point, waves in retrograde fluids, temperature waves in superfluid helium and density waves in suspensions of particles in liquids. Clearly, the aim of the various contributions is twofold. First, they are intended to provide scientists and engineers working in these and related areas with an overview of various new physical phenomena as for example expansion shocks, sonic shocks, shock splitting, evaporation and liquafaction shocks and the experimental techniques needed to study these phenomena. Second, an attempt is made to discuss aspects of their mathematical modeling with special emphasis on properties which these phenomena have in common.