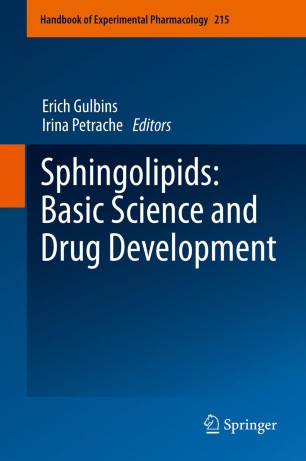 Sphingolipids are lipid components of the plasma membrane in eukaryotic cells. They have an important function in signaling mechanisms in the cell. This book on sphingolipids provides insights into the basics of sphingolipid biology and drug development, with a particular emphasis on the sphingolipid derivative ceramide. In the first part basic functions of sphingolipids are described, as well as the genetics of important enzymes, sphingolipid metabolism and synthesis. The second part of this first volume focuses on drug development and pharmacology. The book is intended for scientists in pharmacology, biochemistry and cell biology with a focus on biomedical research as well as for clinicians working in pharmacology, oncology, cardiology, neurology and infectious disease. Together with Volume 216 by the same editors, the collection represents a unique, comprehensive work on sphingolipids, providing information on both sphingolipids’ basic biology (including synthesis, metabolism and cell biology) and their important function in a (patho-)physiological context.

Erich Gulbins studied medicine at Heidelberg University, Germany, Guy’s Hospital in London, UK and the Medical School in Louisville, Kentucky, USA. He received his MD from Heidelberg University in 1992. From 1992 to 1994 he was a clinical trainee and postdoctoral fellow at the University of San Diego’s Department of Rheumatology and at the La Jolla Institute for Allergy and Immunology, La Jolla, California, USA. From 1994 to 2000 he held a Research Scientist and Assistant Professor position at the Institute of Physiology, University of Tübingen, Germany, where, in 1996, he became Professor for Physiology (Habilitation) at the Faculty of Medicine. Between 2000 and 2002 he served as an Associate Professor at the Department of Immunology, St. Jude Children’s Research Hospital, Memphis, Tennessee, USA. Since 2001 he has been Full Professor and Acting Chair at the University of Duisburg-Essen’s Department of Molecular Biology in Essen, Germany.

Irina Petrache studied Medicine at the Carol Davila University of Medicine and Pharmacy, Bucharest, Romania, she received her MD in 1992. From 1992 to 1996 she was a clinical trainee and postdoctoral research fellow at the Saint Luke´s Medical Center (now Saint Vincent) Case Western Reverse University, Cleveland, OH, USA . From 1996 to 2000 she served as research scientist and clinical fellow in pulmonary and critical care at the John Hopkin´s University School of Medicine, Division of Pulmonary and Critical Care Medicine, Baltimore, MD, USA. From 2000 to 2003 she was instructor of Medicine and from 2000 to 2006 Co-Director of the Sarcoidosis Clinic, John Hopkin´s University School of Medicine, Baltimore. Since 2006 Irina Petrache has been Associate Professor of Medicine at the University of Indiana´s Department of Medicine and holds the Floyd and Reba Smith Chair in Respiratory Disease and has as well been Associate Professor of Biochemistry and Molecular Biology at the Department of Biochemistry and Molecular Biology.