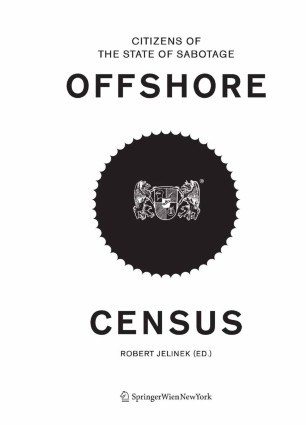 Citizens of the State of Sabotage

State of Sabotage was founded as a sovereign state on the uninhabited Finnish island Harakka by the Austrian artist Robert Jelinek in August 2003. They have a flag, stamps, coins, and an anthem. But particularly the passport (designed by Austrian artist Heimo Zobernig) triggered a dynamism which catapulted the artists’ state all of a sudden into the field of political reality. State of Sabotage was de facto recognized by Slovenia, Switzerland, Monaco, Andorra, San Marino, and Italy. "Offshore" is a tribute to the some 14,000 citizens. The book contains a cultural topography by Irina Ulrike Anderl as well as texts regarding the phenomenon state and art, and the art of state. The main part of the book shows the portraits of the citizens of SoS.