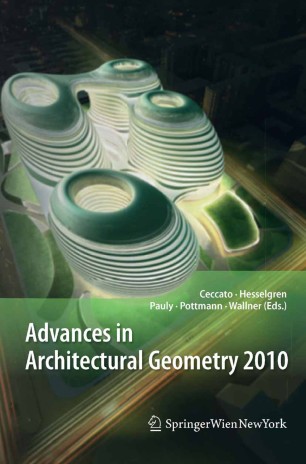 Geometry lies at the core of the architectural design process. It is omnipresent, from the initial determination of form to the final construction.

Modern geometric computing provides a variety of tools for the efficient design, analysis, and manufacturing of complex shapes. On the one hand this opens up new horizons for architecture. On the other, the architectural context also poses new problems for geometry. The research area of architectural geometry, situated at the border of applied geometry and architecture, is emerging to address these problems. This volume, presenting the papers accepted at the 2010 Advances in Architectural Geometry conference in Vienna, reflects the substantial progress made in this field. The interdisciplinary nature of architectural geometry is reflected in the diversity of backgrounds of the contributing authors. Renowned architects, engineers, mathematicians, and computer scientists present novel research ideas and cutting-edge solutions at the interface of geometry processing and architectural design.

Cristiano Ceccato AADipl MSc(CS) DIC MIEEE FRSA Cristiano Ceccato an Associate at Zaha Hadid Architects in London. His work entails a range of management, design and technology leadership responsibilities, leading large-scale public and private projects. Professional focus includes technical team management, design and development of building infrastructure, systems and cladding, including geometric rationalization and constructability resolution of structural and envelope systems; Project governance and cost control through the introduction of Building Information Modelling (BIM) systems and associated practice methodologies across the firm. Cristiano was a co-founder and Director of Research & Consulting of Gehry Technologies, where he was responsible for professional consulting services and technology transfer. At Gehry Partners he was responsible for the development and application of parametric design tools and integrated modeling principles, and associated digital construction methods, on a wide range of design projects at all stages of development. In addition to Frank Gehry projects, Cristiano worked on a wide range of external projects through Gehry Technologies, most recently the Swire One Island East Tower in Hong Kong and the 2008 Olympic Stadium in Beijing with Herzog & de Meuron and ARUP, as well as cross-disciplinary research with Boeing. Cristiano trained as an architect and computer scientist, and specializes in the development of design solutions for complex forms using parametric technologies and computer programming, supporting computational design tools and associated fabrication methods. Cristiano has practiced architecture in Europe, Asia and the US. He has lectured widely on the subject of computational rule-based design systems and parametric form finding in digital building processes. He has held academic faculty positions in London, Milan, Hong Kong, Los Angeles and Australia, where he is currently a Visiting Professor of Architecture at QUT. He received his professional Diploma in Architecture degree from the Architectural Association (1996) and an MS in Computer Science from the Imperial College of Science and Technology in London (1997). He was elected a Fellow of the Royal Society of Arts (UK) in 2004. Awards & Selected Academic Appointments: 1997 Lecturer in Design Computation, Architectural Association, London 1999 Assistant Professor, Hong Kong Polytechnic University 2000 Adjunct Professor, Politecnico di Milano, Italy 2004 Fellow of the Royal Society of Arts, UK 2009 Visiting Professor, Queensland University of Technology, Australia.

LARS HESSELGREN, AA Dip, RIBA, MSc (UCL) Senior Associate Partner, Director PLP Research Lars Hesselgren is the Director of PLP Research and a Senior Associate Partner at PLP since October 2007. Previous to that he occupied the same position at KPF and before 2005 he was the IT Director at KPF London. In 2002 he received the Bentley Lifetime Achievement Award He is an architect with thirty-five years of experience; for the last twenty-five years he has worked with and managed Computer Aided Design systems. His most recent work concentrates on parametric modelling in CAD. He helped create the new Computational Geometry group within KPF and advises on visualisation and IT matters. He is head of the Computational Design Group at PLP which is developing novel tools and techniques within the parametric design paradigm. He is establishing new R&D programmes with University partners and other bodies. At Kohn Pedersen Fox International he was been responsible for the CAD and other computer systems since their installation in 1991, when he joined the practice. His involvement with the IT environment rendered him uniquely experienced to contribute to all KPF's design efforts. His experience includes all types of buildings, including offices. He is a highly accomplished 3D computer user. During his time at KPF he was responsible for the growth of the CAD system from 2 Unix workstations to 150+ PC's running Windows XP. In addition to teaching personnel and managing the system, he has done extensive 3D modelling and imaging of most of the practice's projects, as well as working with design teams advising on complex geometry and their modeling in 3D. Part of KPF's strategy for the public inquiry of the proposed Heron Tower at 110 Bishopsgate was its use of innovation and groundbreaking technology to implement the project. In the initial stages KPF's 3D CAD model was used to help create and verify the bulk and shape of the tower. This model was originally built for the Heron Enquiry using Ordinance Survey data and photogrammetry from aerial photos. It is the largest and probably the most comprehensive currently available and has been cross-checked for accuracy against independent LIDAR (Light Detection and Radar). The Pinnacle Tower geometry was originally modelled parametrically by Lars Hesselgren, work which has been developed by the KPF Computational Geometry Group into a number of advanced programming modules written principally in C#. The geometry of the tower is such that changing one of the input parameters recomputes the complete tower, giving all necessary geometry and attendant data such as floor and kin areas. He is a founder member of the SmartGeometry group (www.smartgeometry.org) which is encouraging the spread of parametric thinking as an architectural design discipline, including spearheading Alpha and Beta testing of Bentley Generative Components. The SmartGeometry Workshops and Conferences are now an established premier place to network about the latest digital design technology with conferences in Barcelona (2010), San Francisco (2009), Munich (2008), New York (2007), London (2006), Cambridge Ontario (2004), Cambridge UK (2003). He writes regularly for many publications on a variety of CAD and technology future issues and he lectures extensively both in US and in Europe, both at Industry Events and at Academic venues. Education He was educated at the Architectural Association, where he graduated in 1971, and he has a post-graduate degree in architectural theory from Bartlett School (1981), where he developed his interest in applied mathematics and computing.

MARK PAULY is an associate professor at the School of Computer and Communication Sciences at EPFL. Prior to joining EPFL, he was assistant professor at the CS department of ETH Zurichsince April 2005. From August 2003 to March 2005 he was a postdoctoral scholar at Stanford University, where he also held a position as visiting assistant professor during the summer of 2005. He received his Ph.D. degree (with distinction) in 2003 from ETH Zurich and his M.S. degree (with highest honors) in 1999 from TU Kaiserslautern. His research interests are in computer graphics, geometry processing, shape modeling and analysis, and computational geometry. He was recipient of a full-time scholarship of the German National Merit Foundation, received the ETH medal for outstanding dissertation, and was awarded the Eurographics Young Researcher Award in 2006.

JOHANNES WALLNER is a professor of Geometry at Graz University of Technology. He received a Dipl.Ing. (master) degree in Mechanical Engineering from Vienna University of Technology in 1996, and after a master degree in mathematics he went on to do his Ph.D. in Vienna in the same area in 1998. He has held faculty positions in Vienna, Darmstadt and Graz, where he is a full professor of Geometry since 2007. He has authored or coauthored 65 scientific publications in pure and applied geometry, nonlinear approximation theory, geometric computing, and geometry processing, including one monograph together with Helmut Pottmann.