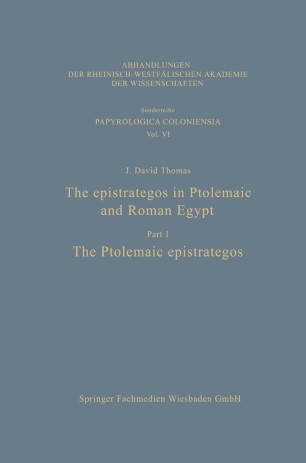 The epistrategos in Ptolemaic and Roman Egypt

It is over sixty years since the office of epistrategos in Roman Egypt was subjected to a detailed examination and in the interverring years a great deal of new papyrological and epigraphic material has come to light. It was my original intention to write a study of the office in this period with, by way of introduction, a brief sketch of the epistrategos in Ptolemaic Egypt. It soon became apparent, however, that a much more fundamental study of the Ptolemaic epistrategos was desirable, which would attempt to answer, or at least to clarify, the various problems connected with the office in this period. In this book I have tried to present a comprehensive up-to-date picture of our knowledge of the Ptolemaic epistrategos. I am far from claiming to have successfully answered all the questions raised -in particular the fundamental problern of the nature of the office remains an enigm- but I hope that I have at any rate provided a basis on which others can build. As the Ptolemaic and Roman epistrategoi did not have a great deal in common apart from their titles, an examination of the office falls naturally into two parts. It therefore seemed not inappropriate to publish separately the first half of this work dealing with the Ptolemaic epistrategos, without waiting for the completion of the second part which will deal with the Roman epistrategos. It is hoped that this second part will follow without undue delay.