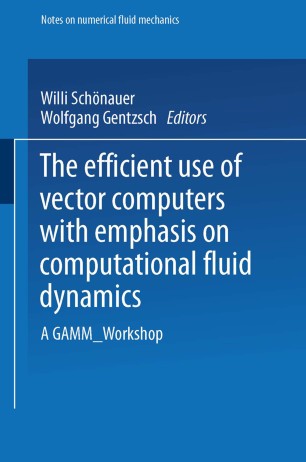 The GAMM Committee for Numerical Methods in Fluid Mechanics organizes workshops which should bring together experts of a narrow field of computational fluid dynamics (CFD) to exchange ideas and experiences in order to speed-up the development in this field. In this sense it was suggested that a workshop should treat the solution of CFD problems on vector computers. Thus we organized a workshop with the title "The efficient use of vector computers with emphasis on computational fluid dynamics". The workshop took place at the Computing Centre of the University of Karlsruhe, March 13-15,1985. The participation had been restricted to 22 people of 7 countries. 18 papers have been presented. In the announcement of the workshop we wrote: "Fluid mechanics has actively stimulated the development of superfast vector computers like the CRAY's or CYBER 205. Now these computers on their turn stimulate the development of new algorithms which result in a high degree of vectorization (sca1ar/vectorized execution-time). But with 3-D problems we quickly reach the limit of present vector computers. If we want e.g. to solve a system of 6 partial differential equations (e.g. for u, v, w, p, k, € or for the vectors u, curl u) on a 50x50x50 grid we have 750.000 unknowns and for a 4th order difference method we have circa 60 million nonzero coefficients in the highly sparse matrix. This characterizes the type of problems which we want to discuss in the workshop".