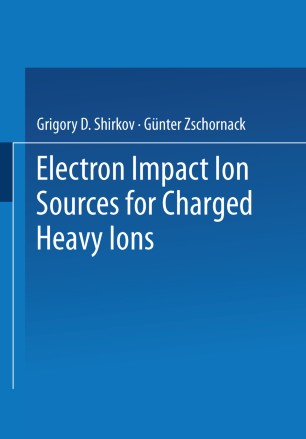 Presently many different types of ion sources exist worldwide for producing highly charged ions. The object of the present book is the treatment of electron impact ion sources like ECR (Electron Qyclotron .Resonance) ion sources, EBIS (Electron .B_eam Ion S.ources), EBIT Electron .B_eam Ion Irap) and ERIS (Electron .Ring Ion S.ources), which altogether are able to produce ions of high charge states. This criterion delimits the book according to classic ion sources, which as a rule can deliver high currents of low charged ions. In the last decades there has been an intense development and building-up of sources of highly charged ions. The first impetus to the building of such sources came from heavy ion accelerator centers, since the effectiveness of a heavy ion accelerator is predominantly determined by the available ion sources. Thereby, the critical criterions for the operation of an ion source are the charge state distribution of the ions produced and the intensity of the extracted ion currents. Besides the employment of sources of highly charged ions in accelerator centers such sources increasingly are inserted separately from accelerators for basic investigations in atomic physics, surface physics and related areas.