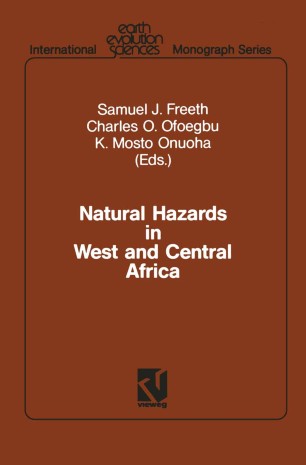 Attention to the problems posed by natural hazards in West and Central Africa was brought into sharp focus by the deaths of an estimated 1700 people in the valleys to the north of Lake Nyos in 1986. Prior to that the only, well documented, major natural catastrophe was the 1983 earthquake which killed at least 275 people in northwestern Guinea. Though we would not wish to appear to suggest that the 1939 Accra earthquake, which killed 16 people, or the Lake Monoun disaster, which killed 37 people in 1984, were not significant events for the areas concerned. The full horror of the Lake Nyos gas disaster was exacerbated, as far as the outside world was concerned, by initial uncertainty concerning its cause. During the first phase of the investigation there were considerable disagreements between some of the participating groups of scientists. Many of these disagreements have now been resolved and it is to be hoped that the contributions in this volume will further help to resolve some of the outstanding uncertainties. However, although it is important to understand what happened at Lake Nyos in 1986, and why it happened, it is more important for the future of that area that further similar disasters should be avoided. We can only hope that this volume will help to establish a solid foundation for future research into ways of removing excess gas from the lake.