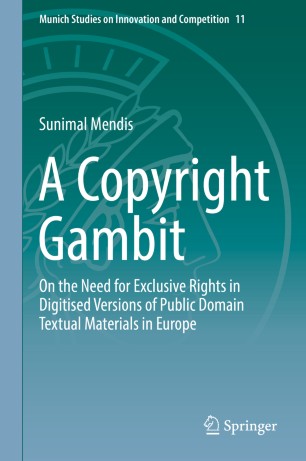 Part of the Munich Studies on Innovation and Competition book series (MSIC, volume 11)

European memory institutions are repositories of a wealth of rare documents that record public domain content. These documents are often stored in ‘dark-archives’ to which members of the public are granted limited access, resulting in the public domain content recorded therein being relegated to a form of ‘forgotten-knowledge’. Digitisation offers a means by which such public domain content can be made speedily and easily accessible to users around the world. For this reason, it has been hailed as the harbinger of a new ‘digital renaissance’.
This book examines the topical issue of the need to preserve exclusivity over digitised versions of rare documents recording public domain content. Based on data gathered through an empirical survey of digitisation projects undertaken by fourteen memory institutions in five European Union Member States, it argues for the introduction of exclusive rights in digitised versions of rare documents recording public domain textual content as a means of incentivising private-sector investment in the digitisation process. It concludes by presenting a detailed proposal for a European Union Regulation that would grant memory institutions a limited-term related right in digitised versions of rare documents held in their collections subject to stringent exceptions and limitations that are designed to safeguard user interests.