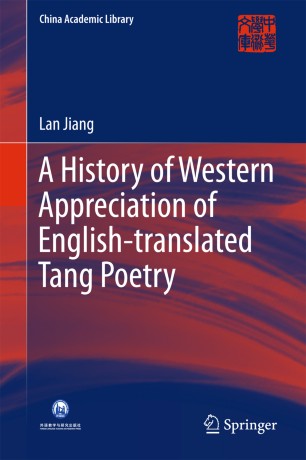 A History of Western Appreciation of English-translated Tang Poetry

This book examines the development of English-translated Tang poetry and its propagation to the Western world. It consists of two parts, the first of which addresses the initial stage of English-translated Tang poetry’s propagation, and the second exploring its further development. By analyzing the historical background and characteristics of these two stages, the book traces the trend back to its roots, discusses some well-known early sinologists and their contributions, and familiarizes readers with the general course of Tang poetry’s development. In addition, it presents the translated versions of many Tang poems.
The dissemination of Tang poetry to the Western world is a significant event in the history of cross-cultural communication. From the simple imitation of poetic techniques to the acceptance and identification of key poetic concepts, the Tang poetry translators gradually constructed a classic “Chinese style” in modern American poetry. Hence, the traditional Chinese culture represented by Tang poetry spread more widely in the English-speaking world, producing a more lasting impact on societies and cultures outside China – and demonstrating the poetry’s ability to transcend the boundaries of time, region, nationality and culture.
Due to different cultural backgrounds, the Tang poets or poems admired most by Western readers may not necessarily receive high acclaim in China. Sometimes language barriers and cultural differences make it impossible to represent certain allusions or cultural and ethnic concepts correctly during the translation process. However, in recent decades, the translation of Tang poetry has evolved considerably in both quantity and quality. As culture is manifested in language, and language is part of culture, the translation of Tang poetry has allowed Western scholars to gain an unprecedented understanding of China and Chinese culture.