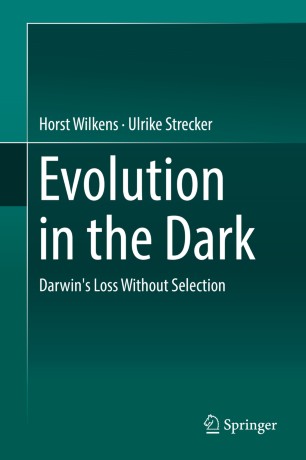 Evolution in the Dark

This book provides fascinating insights into the development and genetics of evolutionary processes on the basis of animals living in the dark, such as the Astyanax cave fish.
Biologically functionless traits show high variability, which results from neutral deleterious mutations no longer being eliminated by natural selection, which normally acts to preserve functional capability. These negative mutations accumulate until the traits they are responsible for become rudimentary or even lost.
The random genetic basis of regressive evolution is in accordance with Nei’s Neutral Theory of Molecular Evolution, which applies to the molecular level. Such processes are particularly conspicuous in species living in constant darkness, where, for example in Astyanax, all traits depending on the exposure to light, like eyes, pigmentation, visually triggered aggressive behaviour, negative phototaxis, and several peripheral outcomes of circadian rhythmicity, are useless and diminish. In compensation constructive traits like taste, olfaction or the lateral line senses are improved by selection and do not show variability. Regressive and constructive traits inherit independently, proving that the rudimentation process is not driven by pleiotropic linkage between them. All these traits are subject to mosaic evolution and exhibit unproportional epistatic gene effects, which play an important role in evolutionary adaptation and improvement.
Offering valuable evolutionary insights and supplemented by a wealth of illustrations, this book will appeal to evolutionary and developmental biologists alike.