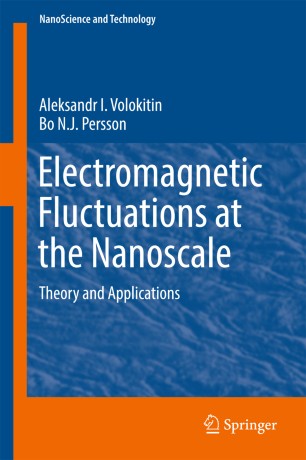 Electromagnetic Fluctuations at the Nanoscale

This book provides a general formalism for the calculation of the spectral correlation function for the fluctuating electromagnetic field. The procedure is applied to the radiative heat transfer and the van der Waals friction using both the semi-classical theory of the fluctuating electromagnetic field and quantum field theory. Applications of the radiative heat transfer and non-contact friction to scanning probe spectroscopy are presented. The theory gives a tentative explanation for the experimental non-contact friction data.
The book explains that radiative heat transfer and the van der Waals friction are largely enhanced at short separations between the bodies due to the evanescent electromagnetic waves. Particular strong enhancement occurs if the surfaces of the bodies can support localized surface modes like surface plasmons, surface polaritons or adsorbate vibrational modes. An electromagnetic field outside a moving body can also be created by static charges which are always present on the surface of the body due to inhomogeneities, or due to a bias voltage. This electromagnetic field produces electrostatic friction which can be significantly enhanced if on the surface of the body there is a 2D electron or hole system or an incommensurate adsorbed layer of ions exhibiting acoustic vibrations.