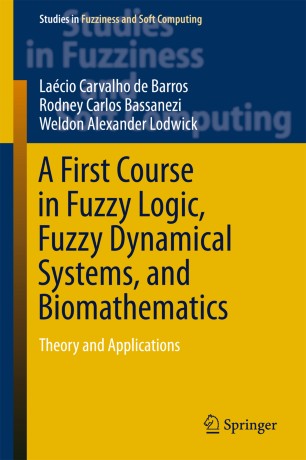 Part of the Studies in Fuzziness and Soft Computing book series (STUDFUZZ, volume 347)

This book provides an essential introduction to the field of dynamical models. Starting from classical theories such as set theory and probability, it allows readers to draw near to the fuzzy case. On one hand, the book equips readers with a fundamental understanding of the theoretical underpinnings of fuzzy sets and fuzzy dynamical systems. On the other, it demonstrates how these theories are used to solve modeling problems in biomathematics, and presents existing derivatives and integrals applied to the context of fuzzy functions. Each of the major topics is accompanied by examples, worked-out exercises, and exercises to be completed. Moreover, many applications to real problems are presented. The book has been developed on the basis of the authors’ lectures to university students and is accordingly primarily intended as a textbook for both upper-level undergraduates and graduates in applied mathematics, statistics, and engineering. It also offers a valuable resource for practitioners such as mathematical consultants and modelers, and for researchers alike, as it may provide both groups with new ideas and inspirations for projects in the fields of fuzzy logic and biomathematics.

Laécio Carvalho de Barros is a Professor of Applied Mathematics at the Institute of Mathematics, Statistics and Computational Sciences, the University of Campinas, and holds a Ph.D. degree in Applied Mathematics from the University of Campinas, São Paulo, Brazil, in 1997. He is co-author of Fuzzy Logic in Action: Applications in Epidemiology and Beyond, Studies in Fuzziness and Soft Computing Vol. 232, 2008, Springer-Verlag Berlin Heidelberg, and of Fuzzy Differential Equations in Various Approaches, SpringerBriefs in Mathematics, Number 1, 2015, Springer International Publishing. His current research interests include modeling of biological phenomena, fuzzy sets theory and fuzzy dynamical systems. Moreover, he has taught fuzzy mathematical modeling and fuzzy set theory classes for over fifteen years to both undergraduate and graduate students.

Rodney Carlos Bassanezi"serif"; mso-ansi-language:EN-US"> is a Professor emeritus of Applied Mathematics at the Institute of Mathematics, Statistics and Computational Sciences at the University of Campinas starting his university teaching career there in 1969. He received a Ph.D. degree in mathematics from the University of Campinas in 1977. He held postdoctoral and research positions at the Libera Universitad di Trento, Italy 1981, 1985, 1990 and 1993. His research activities cover mathematical analysis (minimal surfaces), biomathematics, and fuzzy dynamical systems. He has published some books in Portuguese, notably one textbook on differential equations (1988), one textbook on mathematical modeling (2002), as well as an introduction to calculus and applications (2015). He has been the president of the Sociedade Latino-Americano de Biomatemática (1999-2001) and the coordinator of the graduate program in mathematics at the Federal University ABC in São Paulo. He has directed 55 Masters and 21 Ph.D. theses and his students have been teaching throughout Latin American.

Weldon Alexander Lodwick is a Professor of Mathematics at the University of Colorado Denver. He holds a Ph.D. degree in mathematics (1980) from Oregon State University, He is the co-editor of the book Fuzzy Optimization: Recent Developments and Applications, Studies in Fuzziness and Soft Computing Vol. 254, Springer-Verlag Berlin Heidelberg, 2010, and the author of the monograph Interval and Fuzzy Analysis: A Unified Approach in Advances in Imaging and Electronic Physics, Vol. 148, pp. 76-192, Elsevier, 2007. His current research interests include interval analysis, distance geometry, as well as flexible and generalized uncertainty optimization. Over the last thirty years he has taught applied mathematical modeling classes to undergraduate and graduate students on topics such as radiation therapy of tumor, fuzzy and possibilistic optimization modeling, molecular distance geometry problems, and neural networks applied to control problems.

“The book serves as a sound and balanced exposure to the subject of fuzzy sets by bringing the fundamentals of this technology and presenting their applications to dynamic systems. … the book serves as a timely introduction to the discipline of fuzzy sets and fuzzy modeling and can be recommended to everybody interested in fuzzy sets and a way in which they could be used in solving practical modeling problems.” (Witold Pedrycz, zbMATH 1373.03005, 2017)
Buy options