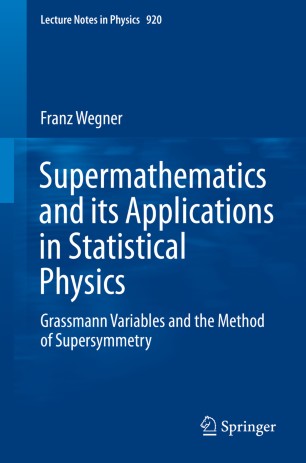 Supermathematics and its Applications in Statistical Physics

Grassmann Variables and the Method of Supersymmetry

This text presents the mathematical concepts of Grassmann variables and the method of supersymmetry to a broad audience of physicists interested in applying these tools to disordered and critical systems, as well as related topics in statistical physics. Based on many courses and seminars held by the author, one of the pioneers in this field, the reader is given a systematic and tutorial introduction to the subject matter.

The algebra and analysis of Grassmann variables is presented in part I. The mathematics of these variables is applied to a random matrix model, path integrals for fermions, dimer models and the Ising model in two dimensions. Supermathematics - the use of commuting and anticommuting variables on an equal footing - is the subject of part II. The properties of supervectors and supermatrices, which contain both commuting and Grassmann components, are treated in great detail, including the derivation of integral theorems. In part III, supersymmetric physical models are considered. While supersymmetry was first introduced in elementary particle physics as exact symmetry between bosons and fermions, the formal introduction of anticommuting spacetime components, can be extended to problems of statistical physics, and, since it connects states with equal energies, has also found its way into quantum mechanics.

Several models are considered in the applications, after which the representation of the random matrix model by the nonlinear sigma-model, the determination of the density of states and the level correlation are derived. Eventually, the mobility edge behavior is discussed and a short account of the ten symmetry classes of disorder, two-dimensional disordered models, and superbosonization is given.