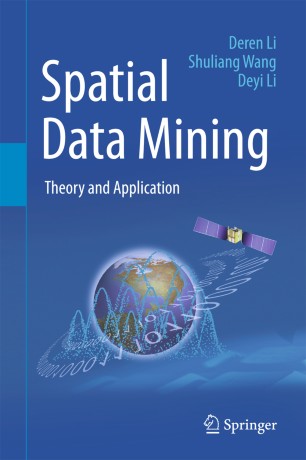 ·        This book is an updated version of a well-received book previously published in Chinese by Science Press of China (the first edition in 2006 and the second in 2013). It offers a systematic and practical overview of spatial data mining, which combines computer science and geo-spatial information science, allowing each field to profit from the knowledge and techniques of the other. To address the spatiotemporal specialties of spatial data, the authors introduce the key concepts and algorithms of the data field, cloud model, mining view, and Deren Li methods. The data field method captures the interactions between spatial objects by diffusing the data contribution from a universe of samples to a universe of population, thereby bridging the gap between the data model and the recognition model. The cloud model is a qualitative method that utilizes quantitative numerical characters to bridge the gap between pure data and linguistic concepts. The mining view method discriminates the different requirements by using scale, hierarchy, and granularity in order to uncover the anisotropy of spatial data mining. The Deren Li method performs data preprocessing to prepare it for further knowledge discovery by selecting a weight for iteration in order to clean the observed spatial data as much as possible. In addition to the essential algorithms and techniques, the book provides application examples of spatial data mining in geographic information science and remote sensing. The practical projects include spatiotemporal video data mining for protecting public security, serial image mining on nighttime lights for assessing the severity of the Syrian Crisis, and the applications in the government project ‘the Belt and Road Initiatives’.

Deren Li,a scientist in photogrammetry and remote sensing, is the membership of the Chinese Academy of Sciences, membership of the Chinese Academy of Engineering, membership of the Euro-Asia International Academy of Science, Professor and PhD supervisor of Wuhan University, Vice-President of the Chinese Society of Geodesy, Photogrammetry and Cartography, Chairman of the Academic Commission of Wuhan University and the National Laboratory for Information Engineering in Surveying, Mapping and Remote Sensing (LIESMARS). He has concentrated on the research and education in spatial information science and technology represented by remote sensing (RS), global positioning system (GPS) and geographic information system (GIS). His majors are the analytic and digital photogrammetry, remote sensing, mathematical morphology and its application in spatial databases, theories of object-oriented GIS and spatial data mining in GIS as well as mobile mapping systems, etc. Prof. Deren Li served as Comm. III and Comm. VI president of ISPRS in 1988-1992 and 1992-1996, worked for CEOS in 2002-2004 and president of Asia GIS Association in 2003-2006. He got Dr.h.c. from ETH in 2008. In 2010 he has been elected ISPRS fellow.
Shuliang Wang, PhD, a scientist in data science and software engineering, is a professor in Beijing Institute of Technology in China. His research interests include spatial data mining, and software engineering. For his innovatory study of spatial data mining, he was awarded the Fifth Annual InfoSci-Journals Excellence in Research Awards of IGI Global, IEEE Outstanding Contribution Award for Granular Computing, and one of China’s National Excellent Doctoral Thesis Prizes.
Deyi Li, PhD, a scientist in computer science and artificial intelligence, is the founder of cloud model. He is now a professor in Tsinghua University in China, a membership of Chinese Academy of Engineering and a membership of the Euro-Asia International Academy of Science. His research interests include networked data mining, artificial intelligence with uncertainty, cloud computing, and cognitive physics. For his contribution, he was awarded many international and national prizes or awards, e.g. the Premium Award by IEE Headquarters, the IFAC World Congress Outstanding Paper Award, National Science and Technology Progress Award and so on.