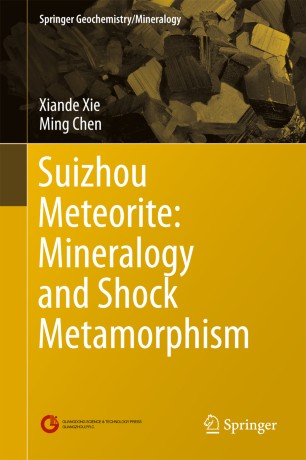 This book introduces the unusual shock-related mineralogical features of the shocked Suizhou L6 (S5) meteorite. The olivine and pyroxene in Suizhou display a mosaic shock feature, while most of plagioclase grains have transformed to glassy maskelynite. A few of the shock-induced melt veins in the meteorite are the simplest, straightest and thinnest ones among all shock-vein-bearing meteorites, and contain the most abundant high-pressure mineral species. Among the 11 identified species, tuite, xieite, and the post-spinel CF-phase of chromite are new minerals. The meteorite experienced a peak shock pressure up to 24 GPa and temperatures of up to 1000° C. Locally developed shock veins were formed at the same pressure, but at an elevated temperature of about 2000° C that was produced by localized shear-friction stress. The rapid cooling of the extremely thin shock veins is the main reason why 11 shock-induced high-pressure mineral phases could be preserved in them so well. This book offers a helpful guide for meteoritics researchers and mineralogists and invaluable resource for specialists working in high-pressure and high-temperature mineralophysics.

His publications include more than 160 scientific papers and 8 monographs. He is the winner of two China National Natural Science Awards, and 12 Awards for Advancement of Science and Technology given by Chinese Academy of Sciences or related Provincial Governments. The book entitled “Mineralogical Approaches to Geological Inverstigations” written by Edward C. T. Chao and Xiande Xie was awarded the Branch Best Paper of Geological Division, US Geological Survey, in 1990.

Professor Xie is a well-known mineralogist. He was elected as President of International Mineralogical Association for 1990-1994, Foreign Member of Russian Academy of Sciences in 1994, and Academician of International Eurasian Academy of Sciences in 2001. His honorary titles also include: Honorary Member of the Mineralogical Society of Russia (since 1991), Honorary Member of the Romanian Association of Scientists (since 1992), Honorary President of Guangdong Provincial Association for Science and Technology (since 2002).