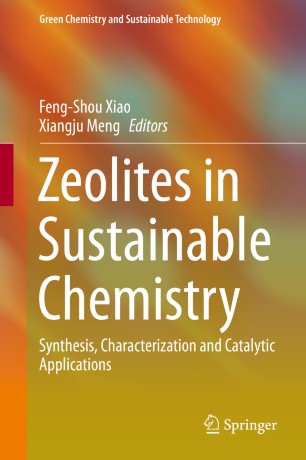 This book is devoted to the new development of zeolitic catalysts with an emphasis on new strategies for the preparation of zeolites, novel techniques for their characterization, and emerging applications of zeolites as catalysts for sustainable chemistry, especially in the fields of energy, biomass conversion, and environmental protection. Over the years, energy and the environment have become the most important global issues, while zeolitic catalysts play important roles in addressing them. With individual chapters written by leading experts, this book offers an essential reference work for researchers and professionals in both academia and industry.

Feng-Shou Xiao is a Professor at the Department of Chemistry, Zhejiang University, China.

Xiangju Meng is an Associate Professor at the Department of Chemistry, Zhejiang University, China.

Prof. Feng-Shou Xiao received his B.S. and M.S. degrees at the Department of Chemistry, Jilin University, China. From there he moved to the Catalysis Research Center, Hokkaido University, Japan, where he was involved in collaborative research between China and Japan. He was a doctoral student there for two years, and was awarded his Ph.D. at Jilin University in 1990. After postdoctoral work at the University of California at Davis, USA, in 1994 he joined the faculty of Jilin University as a professor of Chemistry. He switched to Zhejiang University in 2009, where he now serves as a professor of Chemistry. For his research in porous materials such as zeolites, Prof. Xiao was recognized with the National Outstanding Award of Young Scientists by the National Science Foundation of China in 1998 and the Thomson Scientific Research Fronts Award in 2008. Currently he is also secretary of the Asia-Pacific Association of Catalysis Societies.

Prof. Xiangju Meng received his B.S. (1999) and Ph.D. (2004) at the College of Chemistry, Jilin University, China. Subsequently, he joined the Catalytic Chemistry Division, Chemical Resources Laboratory, Tokyo Institute of Technology, Japan for his postdoctoral work on synthesis and applications of porous materials. After postdoctoral work at the National Institute of Advanced Industrial Science and Technology (AIST), Japan, he returned to China and joined Prof. Xiao’s group. He was promoted to associate professor at Zhejiang University in 2009. His research interests include zeolites and heterogeneous catalysis.