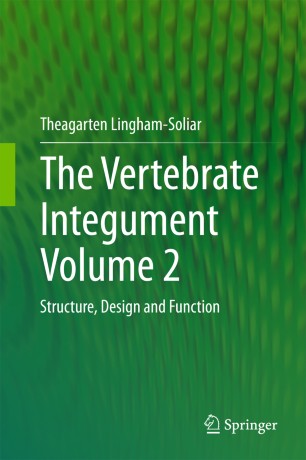 The emphasis in this volume is on the structure and functional design of the integument. The book starts with a brief introduction to some basic principles of physics (mechanics) including Newton’s Three Laws of Motion. These principles are subsequently used to interpret the problems animals encounter in motion.

However, this design principle is not restricted to animals in the marine biota but is also found as far afield as the dinosaurs and, most recently, has been revealed as a major part of the microstructure of the most complex derivative of the integument, the feather. We see that a variety of phylogenetically diverse vertebrates take to the air by using skin flaps to glide from tree to tree or to the ground, and present detailed descriptions of innovations developed in pursuit of improved gliding capabilities in both extinct and modern day gliders.

But the vertebrate integument had even greater things in store, namely true or flapping flight. Pterosaurs were the first vertebrates to use the integument as a membrane in true flapping flight and these interesting extinct animals are discussed on the basis of past and cutting-edge research , most intriguingly with respect to the structure of the flight membrane.

Bats, the only mammals that fly, also employ integumental flight membranes. Classic research on bat flight is reviewed and supplemented with the latest research, which shows the complexities of the wing beat cycle to be significantly different from that of birds, as revealed by particle image velocimetry.

The book’s largest chapter is devoted to birds, given that they make up nearly half of the over 22,000 species of tetrapods. The flight apparatus of birds is unique in nature and is described in great detail, with innovative research highlighting the complexity of the flight structures, bird flight patterns, and behavior in a variety of species. This is complimented by new research on the brains of birds, which shows that they are more complex than previously thought. The feather made bird flight possible, and was itself made possible by β-keratin, contributing to what may be a unique biomechanical microstructure in nature, a topic discussed in some depth. A highly polarized subject concerns the origin of birds and of the feather. Alleged fossilized protofeathers (primal simple feathers) are considered on the basis of histological and taphonomic investigative studies in Chapter 6. Finally, in Chapter 7 we discuss the controversies associated with this field of research.

Professor Theagarten Lingham-Soliar works at the Nelson Mandela Metropolitan University, Port Elizabeth and is an Honorary Professor of Life Sciences at the University of KwaZulu-Natal.