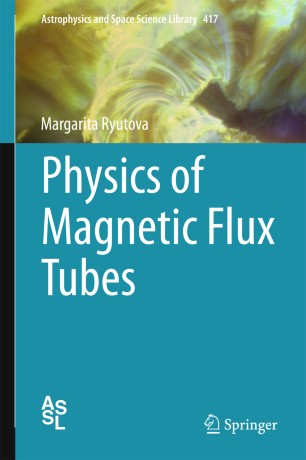 This book is the first account of the physics of magnetic flux tubes from their fundamental properties to collective phenomena in an ensembles of flux tubes. The physics of magnetic flux tubes is absolutely vital for understanding fundamental physical processes in the solar atmosphere shaped and governed by magnetic fields.
High-resolution and high cadence observations from recent space and  ground-based instruments taken simultaneously at different heights and temperatures not only show the ubiquity of
filamentary structure formation but also allow to study how
various events are interconnected by system of magnetic flux
tubes. The book covers both theory and observations. Theoretical models presented in analytical and phenomenological forms are tailored for practical applications. These are welded with state-of-the-art observations from early decisive ones to the most recent data that open a new phase-space for exploring the Sun and sun-like stars. Concept of magnetic flux tubes is central to various magnetized media ranging from laboratory plasma and Earth's magnetosphere to planetary, stellar and galactic environments  The book is a valuable resource for graduate students, solar physicists, astronomers, laboratory and space plasma physicists, geophysicists, and specialists in gas- and hydrodynamics.