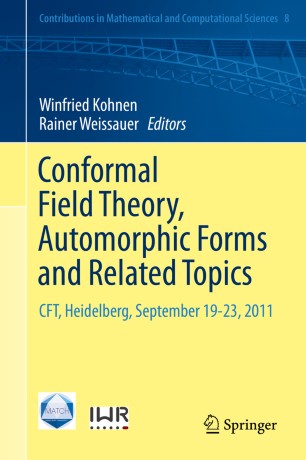 Part of the Contributions in Mathematical and Computational Sciences book series (CMCS, volume 8)

This book, part of the series Contributions in Mathematical and Computational Sciences, reviews recent developments in the theory of vertex operator algebras (VOAs) and their applications to mathematics and physics.

The mathematical theory of VOAs originated from the famous monstrous moonshine conjectures of J.H. Conway and S.P. Norton, which predicted a deep relationship between the characters of the largest simple finite sporadic group, the Monster, and the theory of modular forms inspired by the observations of J. MacKay and J. Thompson.

The contributions are based on lectures delivered at the 2011 conference on Conformal Field Theory, Automorphic Forms and Related Topics, organized by the editors as part of a special program offered at Heidelberg University that summer under the sponsorship of the MAThematics Center Heidelberg (MATCH).