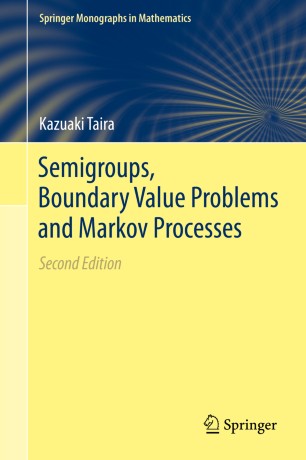 A careful and accessible exposition of functional analytic methods in stochastic analysis is provided in this book. It focuses on the interrelationship between three subjects in analysis: Markov processes, semi groups and elliptic boundary value problems. The author studies a general class of elliptic boundary value problems for second-order, Waldenfels integro-differential operators in partial differential equations and proves that this class of elliptic boundary value problems provides a general class of Feller semigroups in functional analysis. As an application, the author constructs a general class of Markov processes in probability in which a Markovian particle moves both by jumps and continuously in the state space until it 'dies' at the time when it reaches the set where the particle is definitely absorbed.

Augmenting the 1st edition published in 2004, this edition includes four new chapters and eight re-worked and expanded chapters. It is amply illustrated and all chapters are rounded off with Notes and Comments where bibliographical references are primarily discussed. Thanks to the kind feedback from many readers, some errors in the first edition have been corrected. In order to keep the book up-to-date, new references have been added to the bibliography. Researchers and graduate students interested in PDEs, functional analysis and probability will find this volume useful.