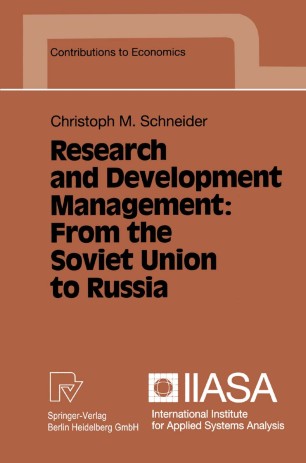 Research and Development Management: From the Soviet Union to Russia

In the past, intensive interest in Soviet research and development has been sporadic both in the West and in the USSR. The end of the 1980s coincided with the demise of the Soviet model of economic development. As a result, a surge of attention has been given to t~e factors driving the motor of Soviet growth and development, as well as R&D. The opening, first, of the Soviet and, subsequently, of the Russian economy, finally exposed it to global stan­ to scientific dards. The long period of international isolation with respect and technological exchanges made it difficult for scholars and policy makers at home and abroad to measure the status of Soviet advances. Consequently, some overrated the levels, while others underestimated them. Now it comes to light that, although the Soviets put the first satellite in space (Sputnik) and developed their own hydrogen bomb, these were more the exceptions of innovation from research results rather than the rule. Therefore, as the management of the entire economy increasingly malfunctioned, so did the management of R&D in contributing to economic growth and development. There is no denying the incredible investment of the former Soviet state in domestic science and research. The R&D community was one of the largest, if not the largest, in the world during the second half of the twentieth century. Now, Russia has inherited not only this enormous resource, but also the inadequate organization, management, and structure.