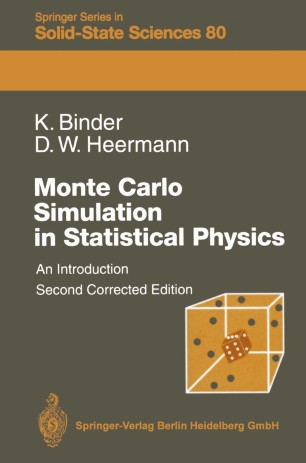 When learning very formal material one comes to a stage where one thinks one has understood the material. Confronted with a "realiife" problem, the passivity of this understanding sometimes becomes painfully elear. To be able to solve the problem, ideas, methods, etc. need to be ready at hand. They must be mastered (become active knowledge) in order to employ them successfully. Starting from this idea, the leitmotif, or aim, of this book has been to elose this gap as much as possible. How can this be done? The material presented here was born out of a series of lectures at the Summer School held at Figueira da Foz (Portugal) in 1987. The series of lectures was split into two concurrent parts. In one part the "formal material" was presented. Since the background of those attending varied widely, the presentation of the formal material was kept as pedagogic as possible. In the formal part the general ideas behind the Monte Carlo method were developed. The Monte Carlo method has now found widespread appli­ cation in many branches of science such as physics, chemistry, and biology. Because of this, the scope of the lectures had to be narrowed down. We could not give a complete account and restricted the treatment to the ap­ plication of the Monte Carlo method to the physics of phase transitions. Here particular emphasis is placed on finite-size effects.