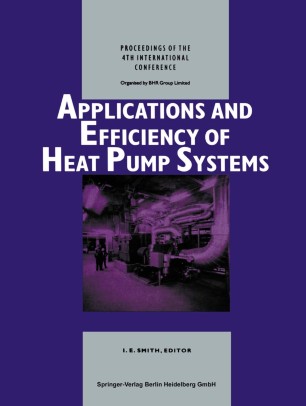 The papers in this collection have originated from Britain, Eastern and Western Europe and India, with the delegates coming from fifteen countries, including a strong contingent from Japan. This indicates a widespread interest in the application of heat pumps. The heat pump suffers from an environmental dichotomy. On the one hand it saves fossil fuel energy, thereby reducing CO emissions. On the other hand, in the vapour compression form, 2 it generally employs CFCs which are destructive to our protective ozone layer as well as contributing to the greenhouse effect. Taking the first, heat pumps, perhaps have the widest application numerically in the heating (and cooling) of buildings and an excellent paper describes case studies concerning three large Norwegian hotels. In these, heat was pumped from the adjacent river or sea when heating was required, and during the summer, when cooling became necessary, to generate domestic hot water. The heat pumps were installed by SINTEF Refrigeration Engineering, Norway, and have demonstrated payback periods of about two years. The fractional total energy saving of the three hotels was 30% as a result, an impressive figure, indeed. A similar paper by a Belgian architectural consortium shows how this technique can be successfully applied to the cooling of a large television complex where considerable quantities of heat were being generated by the luminaries. In this exercise the cooling load was successfully pumped to provide hot water.