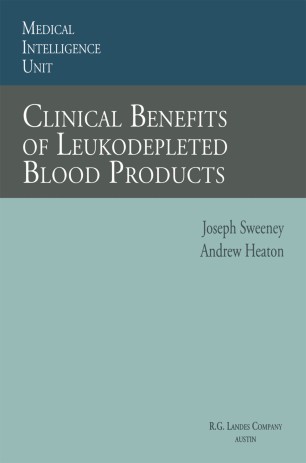 Joseph Sweeney, Andrew Heaton he presence of allogeneic leukocytes in blood products received little T attention until the mid-1950s when these "passenger" cells were im­ plicated in the etiology of febrile transfusion reactions, and early strate­ gies based on centrifugation were developed to effect their removal. In recent decades and, particularly in the past five years, there has been an accumulation of literature implicating leukocytes in a wide variety of undesirable reactions to blood transfusion. White cells are the least numerous of the cellular elements in blood and ratios of white cells to platelets and white cells to red cells are ap­ proximately 1:15 to 1:1000 respectively. This ratio is maintained in whole blood, but may be altered slightly in the process of component prepara­ tion. Any production or processing step which intentionally decreases this ratio will result in a product which can be described as white cell depleted. It has, however, become more common to define the outcome as a residual white cell content, rather than a decrease in cellular ratios, although the latter makes more sense on theoretical grounds, since deple­ tion of white cells needs to be put in the context of any unintentional loss of red cells or platelets. The end result of this intentional processing step, therefore, is generally expressed as the residual absolute number of white cells or as the degree of difference in white cell content, the latter expressed as either a percentage change or as a logarithmic reduction.